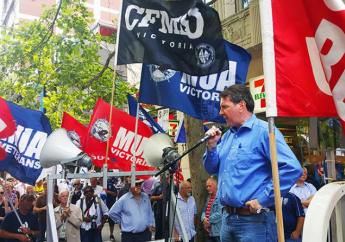 The Research Now poll showed 65 per cent of voters supported a national corruption body but only 11 per cent support a building industry taskforce.

It follows further examples of big business corruption as Fairfax Media and The Huffington Post published an investigation that disclosed a number of companies, including Australia’s Leighton Holdings, were tied up in a global corruption network.

Government corruption has also been highlighted this week with revelations of a $4.4 million political donations scandal involving the NSW Liberal Party, indicating the need for a wide-ranging anti-corruption watchdog.

CFMEU National Secretary Michael O’Connor has renewed calls for a broad-ranging national corruption body that looks into all industries, including all areas of business and government.

“While the Government has been focussed on chasing unions and smashing workers’ rights we have seen allegations arise in Australian business and political circles that indicate very clearly that dishonest behaviour occurs in all industries,” Mr O’Connor said.

“We have seen scandal after scandal come out of the Liberal Party, Australia’s big banks, the ASX, and recent findings from a NSW ICAC that revealed the gaming of coal exploration licences. And yet the Turnbull Government sits on its hands to protect its big business mates.

“We have seen corrupt labour practices where businesses exploit and underpay their workers at 7Eleven and in the hospitality sector. But what does Malcolm Turnbull do? Continues to hound unions and Australian workers to distract the public from what’s really going on.”

Mr O’Connor said the Government needed to come clean on corruption in its own backyard rather than use unions as a scapegoat and distraction for its own unethical behaviour.

“Malcolm Turnbull can no longer turn a blind eye to corrupt behaviour in his own government,” Mr O’Connor said.

“The Government must stand up and act on corruption in the Liberal Party and big business, rather than just hunt unions and workers for political gain.

“It’s not a good look for Malcolm Turnbull to go after unions when the Independent Commission Against Corruption and the Australian Electoral Commission have found the Liberal Party acted dishonestly.”

Australian companies that have been caught up in corruption allegations include Leighton Holdings, Australian Water Holdings, the Australian Wheat Board, BHP Billiton and Lend Lease.