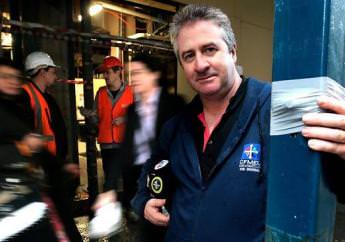 The CFMEU has welcomed the decision of ‘not guilty’ in the Downing Street Local court in Sydney today in relation to a criminal charge laid against official Michael Greenfield by the Fair Work Building Commission (FWBC) about allegations said to have occurred in 2014.

The charge – ‘intimidating a Commonwealth official’ -was laid by the FWBC in mid 2015 over a meeting of workers Mr Greenfield attended as part of his job as a union organiser.

National Construction Secretary Dave Noonan said this was another example of the blatant abuse of taxpayers’ money.

“The community is footing the bill to further the Government’s ideological agenda,” he said.

“This was a case that was sensationally aired at the Royal Commission in 2014 and the Fair Work Building Commission saw the opportunity to charge an official for the sole reason of creating bad publicity for the union.”

“In all of these cases, it was obvious from the outset that there were no grounds for the charges laid and no chance of success.”

“These actions seem to be designed to create a storm of negative publicity for the union without amounting to anything.

“It should be a concern to the community that the Turnbull Government is wasting public money to fulfill its political agenda of passing the ABCC bill.”