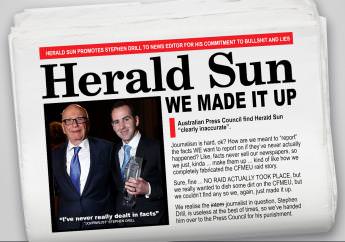 The CFMEU today was collectively rocked by the publication of the first accurate article the Herald Sun has printed in many years.

The publication of the adjudication by the Australian Press Council on the Herald Sun website notes that the article written by Rupert Murdoch lapdog Stephen Drill, about non-existent raids on the CFMEU offices on 27 August 2015 were, ‘clearly inaccurate.’

Read it on the Herald Sun: http://www.heraldsun.com.au/news/press-council-adjudication/news-story/d...

On the day in question, Herald Sun “journalist”, Stephen Drill published an article stating that his “sources” had informed him that the CFMEU offices were being raided by officers from the Heracles Taskforce.  Not letting facts get in the way of a good story, the award-winning “journalist” wrote up the article, published it online and sat back confident in the knowledge that he’d continued the proud tradition of baseless Herald Sun reporting.

CFMEU State Secretary John Setka said, “For some years now, the Herald Sun has skilfully managed to avoid anything that even comes close to the truth. You’ve kinda gotta give it to them, it’s a talent. The publication of today's factual article has really rocked us all. I was six months off winning a bet with Shaun Reardon that they’d go all four years without even coming close to a fact.”

Other CFMEU officials were relieved by the news that the Herald Sun had recognised Steve’s inherent qualities and had promoted him to Chief of Staff on the back of this Press Council ruling.

CFMEU Assistant Secretary Shaun Reardon said, "We were really worried they’d turned a corner for a moment there, but now we hear they’ve put Drill in charge of the whole team. It gives us a bit of confidence that we won’t have to worry about them putting any more facts out there. Now I’ve gotta go and calm poor Cheryl from accounts down."

Cheryl from the CFMEU accounts department, said, "Look, I don’t want to get into the politics of this stuff, but if that bloody paper published any more facts, we were going to have to cancel the latest order of 10,000 “IS THAT THE TRUTH OR DID YOU READ IT IN THE HERALD SUN” stickers."