CFMEU wins another court battle, in defence of members’ privacy 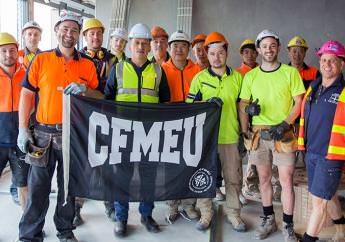 The CFMEU have won another court battle against the Fair Work Building Commission (FWBC) in the Federal Court over the Commission’s attempts to inspect the union’s membership records.

The Full Bench handed down a decision yesterday, saying that the FWBC had ‘exceeded’ their powers in their request.

In January this year, the FWBC sought, through the General Manager of the Fair Work Commission, to inspect the union’s membership register to obtain the personal details of construction workers who they were ‘investigating’ for possible contravention of industrial laws.

In response, the union launched an appeal with the Fair Work Commission seeking to block the FWBC from ­accessing the records.

CFMEU National Construction Secretary Dave Noonan said this was one more example that exposes the FWBC as a union attack unit paid for by the taxpayer.

“The FWBC continue to use the law in a frivolous fashion to tie the union up in court cases with little chance of success.

“In this case, the FWBC had made no decision as to whether or not court proceedings would be instituted against any individual.

“It is a clear abuse of power to access records for the purpose of going on a fishing expedition for a ‘possible’ breach,” he said.

The decision upheld the union’s argument that there are limits on the commission’s power to grant ­access under Fair Work registered organisations laws. It also states that under the Act, there’s no power for the regulatory body to access record as an ‘aid’ to an investigation.

Mr Noonan said members feel very strongly about their privacy and would expect the union to do everything possible to protect it.

“We have a responsibility to our members to protect their privacy and not hand information to cavalier requests from the FWBC as part of the Liberal Party campaign to restore the ABCC.

“The partisan behaviour of the regulator in continually launching cases with little prospect of success against the union is a serious breach of public policy that should be of concern to all taxpayers,” he said.