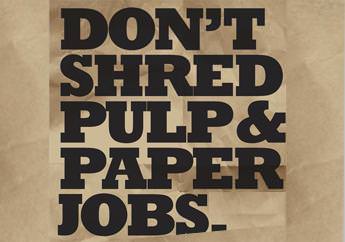 The Federal Government has failed workers by deciding not to put tariffs on 30 billion sheets of photocopy paper flooding the Australian market every year.

Last week, the Anti-Dumping Commission, which has been investigating photocopy paper imported from China, Indonesia, Thailand and Brazil since April, failed to act against the imports.

1000 manufacturing jobs at the largest private sector employer in Gippsland’s Latrobe Valley Australian Paper and five thousand more flow on jobs are under pressure due to the decision.

Alex Millar, Secretary of the Pulp & Paper Workers District of the CFMEU said:

“This was a chance for Prime Minister Turnbull to show workers around Australia that his ‘jobs and growth’ mantra was more than just a three world slogan.”

The union believes that the Federal Government has cowed following threats from China and Indonesia calling for Australia to not take action against their paper exports.

“These strong-arm tactics by China are no surprise given how easily the Abbott/Turnbull Government rolled over to demands in recent Free Trade Agreement negotiations.”

World Trade Organisation (WTO) rules and the Government’s own regulations announced by Industry Minister Christopher Pyne in October 2015 mean that preliminary tariffs should have been put on the dumped and subsidised imports according to the union.

“Mr Pyne’s “Ministerial Directions” and “tough guy” talking points on anti-dumping, one must conclude from this decision, are not worth the dumped paper they’re written on”.

The US Government took strong action against dumped and subsidised paper imports earlier this year including by putting tariffs of up to 177% due to unfair subsidies detected on imports from China.

The Government still has the chance to slap preliminary tariffs on the imports at any point between now and the Federal election.

“Every day between now and the election that tariffs are not put on these unfair imports, Australian workers will remember how much this Government really doesn’t care about their jobs

“The Prime Minister has a choice to take action and protect jobs in regional communities or continue to kowtow to China and the free trade extremists in his own party” concluded Mr Millar.