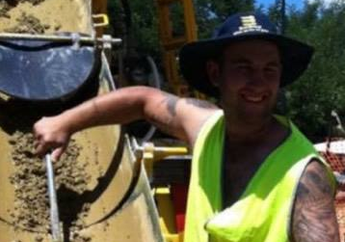 Kay Catanzariti’s son Ben was killed on a construction site in 2012.
The CFMEU has supported her fight for justice…

It’s difficult to put into words how grateful Barney and I are to Dean from the CFMEU Canberra branch. For those members that don’t know or haven’t heard of our journey, my name is Kay Catanzariti. My husband is Barney and we have two son’s, Ben and Jack. We live in Griffith NSW. Ben, aged 21, moved to Canberra in 2011 looking for work as a concreter, as work was slow in Griffith. He had great dreams of starting his own company. Ben's future was ahead of him. He was finding it difficult to find full time work in the concreting industry, so he worked doing different jobs; security, as a removalist and part time concreting.

In July 2012, he was offered a full time job as a concreter. He was on a 3 months trial, and he just loved his job.

Then on Saturday 21st July 2012, that knock on the door changed our lives forever. Only 3 weeks into his full time job, Ben was killed by a 39 metre concrete boom collapsing..... it hit Ben in the head.

Ben hadn’t even had time to sign up to be a union member, our family have always been members of the union.

At Ben’s 1 year anniversary a seat and water bubbler was erected at the site in Kingston ACT where Ben was killed. This meant a lot to us. It was the CFMEU who co-ordinated this with the building companies in paying for the memorial. The CFMEU supplied light refreshments for all that attended from near and far. It was a very emotional day along with meeting many workers that were on site when Ben was killed. One strong memory from that day still haunts me. It’s a comment someone said to me that they wouldn’t come to have a drink as the CFMEU was putting it on.

They said "all they do is come on sites and say you need a microwave or two in the smoko room etc. etc. It’s just crap, we just let them come on, say what they want and say yep, see ya later.”

I recall this conversation many times and only wish I spoke up and said "if a workers' stomach isn’t full they become angry, restless and could take shortcuts to complete a job as they want to eat. Bosses can eat when it suits them, not the workers. If there are 4 or 5 guys in the smoko room waiting to use the one “microwave”, I’m quite sure smoko time will be over before they all get to heat up their meal and eat. So how important is a simple microwave?"

Remember everything starts at the bottom, simple things can make for a content person. As I say the foundation is the most important part of any building construction or relationship.

We had never been involved in any legal situation before Ben’s death. I hope that none of you ever experience the death of your loved one from a workplace incident either.

First we had a Coronial Inquest, there were only a few mentions before it was referred to the “Industrial Court”. Two years on, four criminal charges were laid. We put our faith and trust into the DPP as they were, we thought, the experts in investigations into the legal proceedings such as in Ben’s case. First the DPP dropped one charge, then the other three.

Four years on, we go back to the Coronial Inquest.

What would we know? We are the average working class family, no degrees, no influential friends, aren’t wealthy or well off and with no legal expertise. We are grieving the loss of our son, our minds aren’t functioning even now - 55 months on we still only just exist - it's hard enough just to get out of bed each day and breathe.

The Coronial Inquest would only go for maybe 2 or 3 days. I believe the questions we would like to be answered won’t be permitted. I would like accountability for Ben’s death, he shouldn’t be dead! This is something that won’t happen, because we weren’t personally legally represented from the start, I failed.

The next court mention was on the 19th January 2017, and we only had till the 18th to notify the court if we were going to be legally represented. I was prepared to mortgage our home in the hope we didn’t lose it. It was a extremely difficult time in our home. I was broken & in unfamiliar situations. In a last minute despair I contacted the CFMEU in Canberra and the National Office asking for their expertise. As this is only one of the many things that the CFMEU do, they try to protect you - the worker - and they support affected families. Until you are in a situation you don’t realise how much the CFMEU actually does for the workers. You always hear the negatives not the positives.

On the 16th January 2017 I received a call from the CFMEU saying they would supply a legal team for Ben’s Coronial Inquest. It’s not just for Ben, this is for all of the non member's and members of the CFMEU to go home safely each and every day. I wouldn’t want another family experiencing what we have and will continue to endure until the day we die.

My only hope is the CFMEU’s legal team can help make change. Safety procedures need to be put in place and followed through so that no other worker will be killed. If only someone had the strength to speak up earlier, maybe our Ben would still be alive today.

We feel extremely humbled & grateful to the CFMEU for supplying us with legal representation during Ben's Coronial Inquest in April 2017. They have come to our aid - people we didn't know prior to Ben's death. When they heard we were at the end of our tether they offered their support, and now we can finally have a voice. I hope it will save another death on a construction site, and maybe a glimmer of hope that we shall get to ask our questions in the Inquest.

When you're in trouble and need help who are there? CFMEU.

People with money & power wanted me to go away, now the support of the CFMEU has given me strength to continue. Please support your unions for you never know when you may need them. I’m nothing, I was standing alone. I’ve learnt it’s strength in numbers and being a member of the Union helps those less fortunate in times of need.

Question: Do you pay insurance for your house and car? You do, in the hope that it doesn’t burn down, get broken into or is hit by floods.

Union fees are the same, hoping you don’t need their assistance. It’s tax deductable, and provides benefit's and discounts to you and your family - even grants are available through some unions for your kids.

Ask your workmates, are they in the union?

I hope you will all take the time on the 28th April to remember your work mates that have been killed or injured while working.

Thank you again from the bottom of my heart to all the members, office staff and all at the CFMEU.