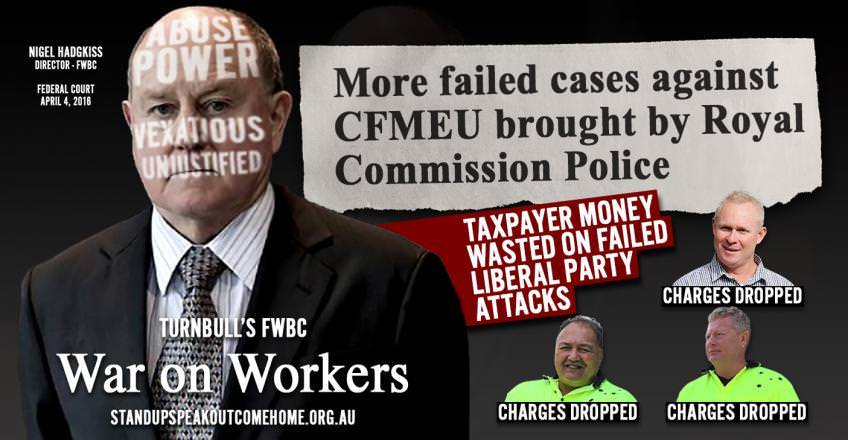 Two more cases brought against the CFMEU by the Trade Union Royal Commission Police have failed in court in Brisbane this week.

CFMEU National Construction Secretary Dave Noonan said the decisions in the union’s favour in relation to cases launched by the Trade Union Royal Commission Police demonstrate once again, that the police is being used for political purposes.

“Both Mr Bragdon and Mr O’Brien were arrested in September and October 2015, respectively for alleged offences dating back two and a half years.

“Their arrests were at the height of the Trade Union Royal Commission when the Liberal Government was attempting to create a climate of hysteria in relation to the union in order to garner support for their ABCC bill.”

“It is clear that these cases had little chance of success. The magistrate in Mr O’Brien’s case called the prosecution’s case a ‘dog’s breakfast’ and costs were awarded in his favour.

“As we have seen in previous cases brought against CFMEU officials in the ACT, Queensland and New South Wales, there were very flimsy grounds for the charges laid and it must be obvious to any first year law student that they have little chance of success.”

Mr Noonan said the community are owed an explanation as to why public money is being wasted on cases where there are no grounds for the charges laid.

“How many more millions will be squandered by the Turnbull Government in order to promote their ideological agenda, when there are more pressing matters for the police to attend to?”