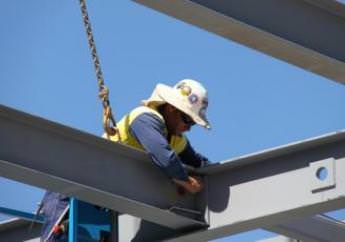 Claims made by Liberal politicians and the Master Builders Association that wage increases for construction workers is inhibiting infrastructure investment has been totally discredited by a report released today by BIS Shrapnel that shows that construction costs for infrastructure projects are at record lows.

According to Mark Ludlow in the Australian Financial Review  (21 June 2016) the BIS Shrapnel report claims that the low construction costs are delivering some projects at half the price they were before the global financial crisis.

The BIS Shrapnel report also completely destroys the MBA claim that the CFMEU’s wage bargaining outcomes will add over $1 billion to QLD’s infrastructure projects over the next four years and suggests that state and federal governments take advantage of the low construction costs and invest in infrastructure.

CFMEU National Construction Secretary Dave Noonan said this report demolishes the claims made by a number of state and federal Liberal politicians including Senator Michaelia Cash and Malcolm Turnbull.

“Liberal politicians and the MBA have been making bogus claims about the wages and conditions we negotiate for our members, blaming the union for ‘escalating costs’ in much needed infrastructure that they’re not building.

“What this report shows is that there are no escalating costs and one can only conclude that they have been making it up as part of their crusade against construction workers.”

On May 26, in the Australian Financial Review Senator Cash said taxpayers would "foot the bill for the CFMEU's stranglehold on the building and construction industry and the price they pay is to have less investment in critical infrastructure".

On June 2, Malcolm Turnbull said on 2UE in relation to the Victorian CFMEU EBA, that excessive wage rises would be stopped under a Liberal Government and reminded listeners that this was the reason for the double dissolution election.

Today, in The Australian, the MBA in Queensland released a report by Deloitte Access Economics that claimed wages in the industry were out of control, threatening funding for hospitals and schools.

This follows the same claims of a ‘wages blowout’ that were made by the MBA in Victoria last month, also based on report by Deloitte Access Economics that they commissioned.
Academic from Sydney University, Dr Phillip Toner assessed the report and found that it exaggerates the absolute level of wages paid to workers by making illicit assumptions about the pay rates and actual hours that workers are employed on site.

Dr Toner also found that purported comparisons of hourly rates of pay in certain occupations covered by the Victorian construction EBA and other occupations, such as engineers, police and teachers are invalid.

“The MBA claims are therefore fanciful and almost as bad as the fake tradies ads put out by their political masters, the LNP and the Turnbull Government,” said Mr Noonan.

“Hand in glove, the Liberal Government and the MBA simply want to cut workers’ wages and put more money into the pockets of the property developers, many of whom, are big donors to the Liberal Party.”