Win for workers as spotlight turned on casualisation 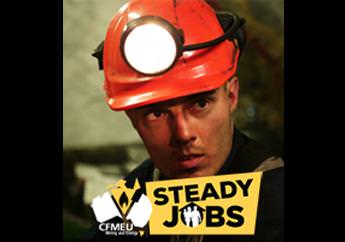 In a big win for the campaign for good, steady jobs, Labor today announced their intention to review the definition of casual work.

Labor is the first major party to respond to the Steady Jobs campaign, which calls for a comprehensive plan to minimise the harm caused by insecure work arrangements.

CFMEU Mining and Energy Division Executive Vice President Mitch Hughes said it was now incumbent on LNP MPs in Queensland to explain whether they support a review.

“George Christensen needs to tell us whether he thinks this is a real issue, or whether he wants to continue to sit on his hands and do nothing about the exploitation of casual workers,” Mr Hughes said.

“Mr Christensen has had three years to stand up for workers in Mackay and Central Queensland, but if he is not prepared to support local jobs, then he can’t expect voters to support him at the election.

“Michelle Landry and Ken O’Dowd are in the same boat – they’ve done nothing about an issue that affects a huge number of people in their electorate because they’re captured by the big mining companies who want to continue to be able to rip off workers.

“With only a week to go until the federal election, it is time that LNP MPs stood up for workers in Central Queensland and announce whether they support a review of casualisation.

“Right now, the LNP don’t seem to have a plan for protecting permanent jobs or reducing contracting - they only has a plan to protect their own jobs.”

“These workers also deserve to know the position of both major parties on this issue before the election.